The more I play Kinect, the more I am addicted to the concept. I know that most of us gamers should be appalled at the thought of getting up and move around. Maybe, just maybe, this was created for us who do sit still all day and need to get up and move those slowly growing tuckers. For years I’ve given up on XBOX 360. They never released much of late that captured my interest long enough. Honestly, the last few years I’ve seen stuff growing out of my bellybutton that is more interesting to me then any XBOX releases.

Then we got a Kinect.
People compare it with PS3 motion and the Wii-motes, but trust me, this is different. There are no buttons to control any actions, it is just you and only you.

After completing Kinect adventures I set my attention Michael Jackson the experience. Again, it did not disappoint. I’ve been moving around like crazy, sweating and pulling muscles left and right. Body parts flying all over the room and by sheer luck, nothing has been destroyed yet. Captured by this siren of gaming I’ve neglected to review a Triolith game that I downloading form the android market a while back.

So let me tell you a little bit about Wisp.

Let me first of note that I will be playing this game on an Android phone (sorry apple fanboys). A HTC Evo 4G to be exact.
Feel free to look up the stats so you understand what kind of firepower I am working with.

The game started with loading the Triolith logo, what i notice is that I see rogue pixels in the rounded corners of the logo. I am not sure if it was made intentionally but it did give me the itch to erase them. Just a taste thing I guess.
On to the next screen. It is an image of a tranquil Forrest scene with lovely mushrooms and some glowing dots/flowers. I can read the buttons but i had to squint to read “HQ”. Then there is a logo of a speaker and another one for music. I assume that one removes sound and the other removes music only, keeping the sound effects. That threw me a little bit of because it just seems a little bit randomly placed. I guess this is an attempt to make things faster to access which is appreciated, but confusing for us who are used to an “options” menu.

The music is very captivating and very euphoric, which is to be expected for a “fantasy” style game. The loading time for the first level itself took well over 10 seconds, which is not to bad, it just did have me worried momentarily that my phone crashed. So for you people who have no patience, wait…a….bit…longer.

Now, to the controls. They threw me off a bit since my fat fingers kept getting in the way of the lovely wisp character Eira. I think this is something that can grow on me a bit later, but for now the primary controls are tilting your device left and right to move, while holding your finger on the screen to have her ascend.

I was surprised not to see a story or an intro. Nothing really to introduce the character in the first level. I thought maybe I missed something important so I reloaded the first level. Still nothing that really introduces the character.  I wanted to return to the main menu, but there was no option in game to go there. Probably for the best too, because the finger is all over the screen, you would most likely keep pressing menu by mistake. I do think that there is a solution. For instance, instead of a pause button on the right top corner and a reload button on the left, there could be an option button instead that pauses the game automatically (encase you press it by mistake) and it would give you the option of returning to the main menu. What I do enjoy is that you get to see the instructions as you “fly along” which is a bit more interacting rather then a manual. Once you finish a level, the menu will be available to you. It brings you to the level selection so I can for now assume that there isn’t an intro story in the very beginning. That the creators might have placed it along the way. I pressed to continue on level two. Again I thought it froze, because it took 13 seconds before the loading screen turned up. I might just be impatient or something.

Now it gets a little bit more challenging. Still no story really but you are told that there is some black icky vile goo that is dangerous. Just for the hell of it, I flew in to it to see if I’d experience some fairy splatter, but nope. It was a quick implosion. Parents, this is childproof. Thought I wouldn’t let children touch the device because, you know, stiiiiicky fingers. 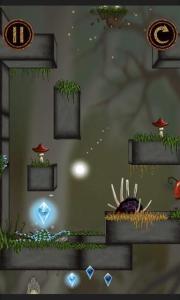 While flying around and enjoying your tranquil wispy groove, you come across some shiny things. You know how them fairies like shiny things.  There are three in each level. That is how many there has been thus far so I can assume that it is that way on every level. Some are hard to get, protected and cleverly hidden. When you collect all of them, you are presented with a perfect game. This brings a bit of a challenge since not only do you have oozy black holes (that are fueled by pure evil!) but you have to satisfy her bling satisfactory too. Greed doesn’t become you Eira! Either way, to the point. It is a very much enjoyable game. Even if I would like an intro to present me with a task of survival and/or save the world. It felt empty to start. But continue on and you will be rewarded. If anything it will give you some relaxing tunes while and a beautifully yet simplistic designed graphic to go with it.

Now, the big question, would I buy it? Well I already did, so yes I would. I enjoyed it and I will continue enjoying it. Does it feel like something revolutionary and new. No, it is very familiar and somewhat safe. I Would’ve liked to see some other theme using this engine. Fantasy casual can sometime become disappointing for people who are used to the crazy elaborate stories and new types of battle engines. I think that if you are going to make something casual, use a design and a model that is unique. For instance, instead of a wisp in a  Forrest, a cat wearing a top hat that moves itself around by expelling some methane gas, and be careful of the fire torches! I know that it sounds silly and probably someone already made this but it would be a bit more entertaining to me. Then again, I am a big fan of Thunderbang!

I can’t wait to see what Triolith comes up with next!