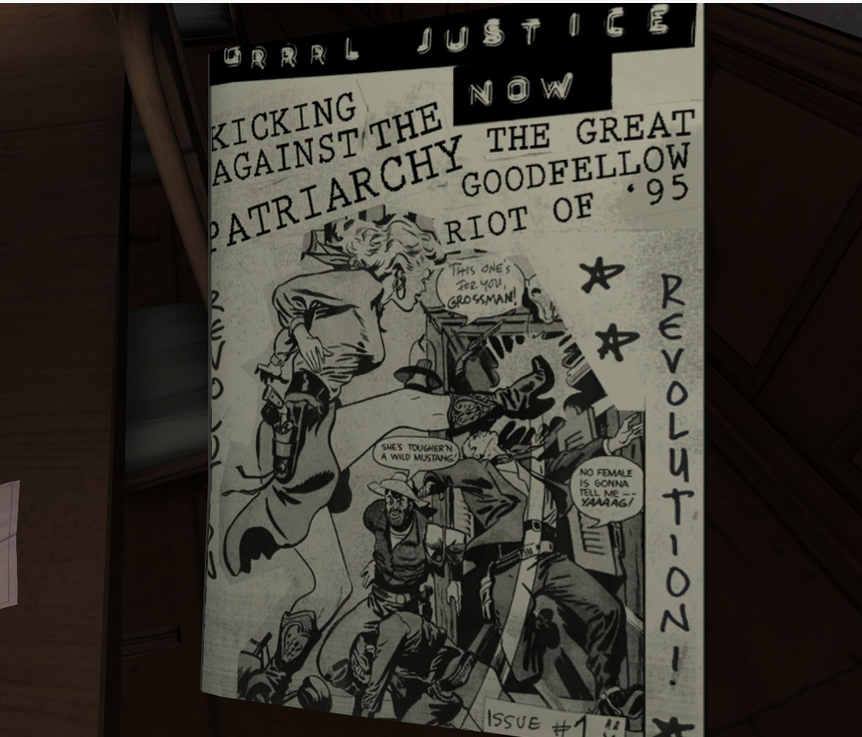 As my previous post indicated, I am ready once again to join the written review world.

You might have noticed that I missed my own deadline of reappearance with a week. My dears, it is flu season in Sweden and unfortunately for me, I was one of its victims.

But as promised, let me tell you about this very interesting, short, but well executed non the less, game called Gone Home.

You arrive home after a year abroad. You expect your family to greet you, but the house is empty. Something’s not right. Where is everyone? And what’s happened here?

Gone home is an interactive exploration simulator. Interrogate every detail of a seemingly normal house to discover the story of the people who live there. Open any drawer and door. Pick up objects and examine them to discover clues. Uncover the events of one family’s lives by investigating what they’ve left behind.

Are you a bit fan of interior design? This game will take you back to the early 90’s, when Fresh Prince was roaming the airways and we’ve just left the best decade in pop music, the 80’s. I kid you not when I write that I had several awkward deja vu whilst playing.

You are a young whippersnapper in your early 20’s called Kaitlin Greenbriar. You have been out gallivanting around Europe while your parents are at home worried sick. Children are ever so selfish.

You make your way home after a year only to discover that no one is there to greet you. Like a little kitten that no one wants because it “accidentally” decapitated the precious family goldfish. The feeling of utter neglect. It is a stormy night and the electricity flickers. The TV shows static while the wind whistles outside, causing the branches to occasionally brush against the windows. The only sign of any life is a message on ye olde answering machine from your distressed baby sister. The voice is obviously upset as it tries to explain absolutely nothing. So now you are in your parents “new house” that they have inherited from your uncle with a question “Where is everyone?”.

The ambiance tells you to be fearful and on alert as you make my way through various rooms and corridors, puzzling together a very mentally alluring story. But as soon as something unexpected presents itself that should prompt a reaction of fear, you are faced with a moment of “oooh look, VHS!! I REMEMBERED THESE SHOWS!”.

You have turned into an old tourist visiting a museum of memories past.

You find various clues of what have occurred and why no one is there to meet you. While getting a picture painted of the most horrible events taking place you find yourself in awe of the sheer details that went into creating the atmosphere.

I cannot tell you much more about the story itself as it is very very short. I finished it within an evening and I took me time to admire the amazing voice acting performed and incredible attention to details to depict a flawless representation of a 90’s something American household. The characters are deep and engaging. If you have no plans for the evening I’d say get this game, as it is more entertaining than what ever you may find on Netflix.

Set in the year 1995, the plot focuses on exploration of a mansion in Portland, Oregon, and examining common household objects within the home.-Wikipedia